I seldom binge watch anything on TV.   I don’t have the attention span, nor the time, and am pretty fussy about what I watch.  Not that I wanna appear as a snotty bitch, I am an EastEnders fan after all.  Still it is autumn and cookie season is in full swing.  I spend a lot of time in my kitchen, which makes it ideal for hammering my way through several hours of TV, as I make and weigh hundreds of dough balls.

I binge wore Cèdre Sambac basically for the month of July.  Every single day.  I could not stop.  I had used up a travel size between April and June and as it came to an end I bought a bottle, knowing I could not bear to be without it.  In all my years of being a perfumista, this has never happened.  It is so beguiling and narcotic that I took to it like a drug.  Talking of drugs, you might wanna take a look at my Strange Tales series which will feature on A Bottled Rose the last Friday of each month.

Hermès describe Cèdre Sambac as being raw, voluptuous.  Nagel has created a very clever fragrance.  The notes are simply given as jasmine and cedar.  The two of them wrap themselves around each other in total unification.  The creamy jasmine sambac being a little more dominant in the summer heat.  In the cooler autumnal weather the cedar feels warm and on top, veiling the jasmine a little.   The jasmine  and cedar switch between being sometimes more green, and sometimes creamy,  a touch of sweetness,  kept at bay with the light sharpness of the wood.  A fragrance for all seasons.  There is a soft inkling  of suede in the dry down, which places the Cèdre Sambac so adeptly into the Hermès home.  Tara fell in love with it too.

I have binge watched six out of ten hours over the last two days of Trust.  Directed by Danny Boyle, and starring Donald Sutherland, Harris Dickinson and Hilary Swank, it tells some of the stories of the Gettys; one of America’s wealthiest and unhappiest families.   It begins in 1973, when John Paul Getty III is kidnapped.  Those as old as me may remember it happening.  I love Sutherland in the role as he, as an actor was so prevalent in movies from the early seventies, not least of all Don’t Look Now.  He fits so well as Old Man Getty in Trust.  Hilary Swank is excellent as Gail Getty, mother of JPG III.   Although the series is shot with the high tech of 2018, the effects from the seventies, flash you back to that era.  Boyle does a great job.  And the music – Pink Floyd, Bowie, Hawkwind, Jefferson Airplane, Thunderclap Newman, Uriah Heep – superb.   I dunno if I would sit down and spend ten hours watching this in couch potato mode, probably not.  But it is the perfect Cookie Kitchen entertainment and I am loving every second. 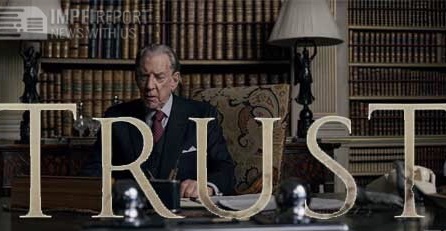 You guys into any particular mode of bingeing?  Can you wear the same scent for weeks on end?

“Grab that cash with both hands and make a stash …..”